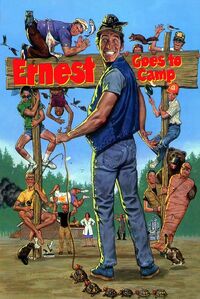 Ernest Goes to Camp is a 1987 comedy film directed by John R. Cherry III and starring Jim Varney. It is the second film to feature the character of Ernest P. Worrell. It was shot in Nashville, Tennessee and its suburbs. This movie is also Iron Eyes Cody's final appearance on screen.

Ernest P. Worrell, now working as a maintenance man at a summer camp and hoping to become a counselor. With his typical enthusiasm, he pours himself into the role and quickly becomes a valuable addition to the staff, in particular for his passion at learning the specialized sign language used by the camp's owner, Chief St. Cloud (Iron Eyes Cody), who does not speak English.

Though initially hired as a handy man, Ernest gets his chance at counseling when he is assigned a small group of juvenile delinquents that the regular counselors are hesitant to take on--primarily because the group hospitalized their first counselor, Ross Stennis, by pushing his lifeguard chair into the lake while he was sitting in it. Ernest quickly takes the side of the boys, due to his compassion and for having suffered his own abuse at the hands of the militant Counselor Stennis. At first, the boys torment Ernest, playing practical jokes and mocking his efforts to get them interested in the outdoors. Their efforts are also met by resistance from other, more affluent campers and counselors. It becomes clear that Ernest knows a great deal about nature, but has a tendency to "fake it" when he runs up against a tough question or genuine mystery. However, the boys start to show a little respect during a campfire session when Ernest translates the Chief's description of the warrior initiation ritual for his tribe. Traditionally, the young warrior stands in front of a target that is set on tree, while another warrior quickly aims and throws three weapons at the target in a dual display of accuracy and courage. The initiate must hold still while a knife, a stone hatchet, and an arrow are thrown or shot at the target. It is implied that the courage of the young warrior actually alters the course of all three to prevent them from killing him. Meanwhile, an evil mining corporation run by the ruthless Sherman Krader (John Vernon) has its sights on the summer camp, a site rich with the fictional mineral petrocite. However, Chief St. Cloud, the camp owner, refuses to sell. Krader manipulates the naive Ernest, one of the few people who speaks the chief's language, into convincing St. Cloud to sign away the land, believing it to be a conservation petition. Using Ernest as an interpreter, St. Cloud signs the deed away. His granddaughter, a doctor and primary caregiver at the camp, tries to talk Ernest out of doing anything rash until she can get a lawyer. She firmly believes that they can win the case if they can get to court, but Ernest objects, knowing that by the time they can get to a hearing, Krader will already be tearing down the camp for a strip mine. Ernest decides to fix the situation by storming into the construction site and picking a fight with the foreman (Lyle Alzado), though he mainly chooses to do this out of a sense of guilt for his mistake and the risk of disappointing the kids. Ernest is savagely beaten; moreover, he cannot contain his sense of personal shame and leaves the camp for a while to be alone. When the camp doctor, St. Cloud's granddaughter, overhears the kids verbally demeaning Ernest's effort, she chastises them and reveals that Ernest is the only person who has defended them, both to the authorities and to the camp staff mostly because he was the only one who really cared about them. When they learn about the sacrifices that Ernest has made on their behalf, including the beating at the construction site, they resolve to find him and apologize. In doing so, Ernest and the campers quickly mend their relationship through their newfound respect for him. Even so, Krader is poised to demolish the camp, and when the regular staff and campers are sent home, the group decides to risk openly attacking the construction site to stall for time. Recruiting the Second Chancers, the two regular campers who usually picked on them and the chefs Jake and Eddie, Ernest plans a full-scale assault as the construction company begins to demolish the camp. The group works feverishly to create a series of improvised, non-lethal weapons. Prior to the attack, Chief St. Cloud arrives to pass along a native blessing, though his granddaughter begs them not to go through with it. Ernest, in a rare moment of stoic resolve simply states, "They ain't gonna take this camp."

The assault is fast and quickly cripples the construction site's equipment by blowing it up through a series of small explosions. In a brief moment of retribution, the campers are able to take small revenge against the foreman by filling the back of Ernest's motorized maintenance cart (which had been driving itself aimlessly around the camp through out the movie as a running gag) with minor explosives, including Jake and Eddie's Eggs-Eronious, and rolling it into his bulldozer, causing moderate damage to it. Ernest then punches the foreman out for good measure. Krader then arrives at the camp and having reached his breaking point after seeing the destruction of his equipment, pulls out his high-powered hunting rifle and targets Ernest. Echoing the film's opening scene, which features a Native American brave surviving three tests of courage. Ernest faces down Krader and apparently passes the age old test as Krader takes three shots at him and they all miss their mark (Krader is an excellent marksman and never usually misses). Ernest then plugs the villain's hunting rifle with his finger and laughs in his face signaling his defeat. The boys and Ernest succeed in protecting the land and Kamp Kikakee remains for young campers to enjoy--particularly when Nurse St. Cloud returns with a restraining order. Ernest remains a counselor, although he also still remains his clumsy, inept (yet good-hearted) self.

The songs were written by Alice and Shane Keister.

Ashley Cleveland sings "We're gonna win this one" while the boy campers build their teepee.

Gary Chapman sings "Brave Hearts" during the film and in the credits.

Ernest sings "Gee I'm Glad It's Raining" when he and other campers are sad about the camp's closing.

The song used to detach the box turtle from Ernest's nose is "Happy Together," a song which was written and recorded by the musical group The Turtles. It also serves as a theme song of the film.

Retrieved from "https://ernestpworrell.fandom.com/wiki/Ernest_Goes_to_Camp?oldid=4568"
Community content is available under CC-BY-SA unless otherwise noted.