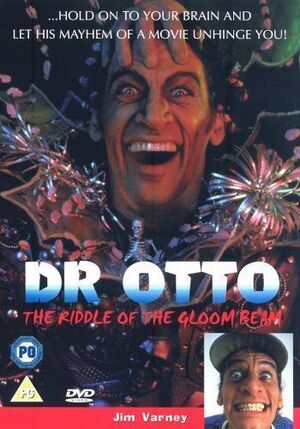 Dr. Otto and the Riddle of the Gloom Beam is a 1986 comic science fiction film starring Jim Varney. It was written and directed by John R. Cherry III. The film does include Ernest P. Worrell, but takes a slightly darker tone than his usual appearances. The film was released on video in 1992 by GoodTimes Home Video. It was shot in Fall Creek Falls State Park, Boxwell Scout Reservation and Nashville, Tennessee.

The film opens with Ernest P. Worrell talking nonchalantly to his friend, Vern about a machine that can transform people into anything. Suddenly, something goes wrong and Ernest is sucked into the machine. Dr. Otto, a mysterious villain with a hand growing on top of his head, is plotting to have world domination with his gloom beam which when fired can delete matter, delete memory and has the power to destroy the world but we have the bumbling hero lance to stop him, and the only clue humanity has is a riddle which reads: "When the money is scrambled to the very last cent, riots and hatred soon will commence. When all the world's commerce will be put in a bind, from the evil that lurks where the sun never shines. It is I, Dr. Otto von Schnick -ick-ick-ick, who has played on you this trick-ick-ick-ick." "But who's Dr. Otto?" you may well ponder, while all your magnetic cash is squandered. It's he who had an eye, and yet couldn't see. It's he who served bouillabaisse, when he was a she. It's he who gambled with brains, and a gun. It's he who had all, and yet had none. And to stop this horrible twisted trick, just exchange the poles of old Saint Nick. And if that doesn't do to save the day, put another quarter in and try another play. Soon Lance and Doris are going to Dr Otto's lair when they have what Lance thinks is regular car trouble but really they were sabotaged by Dr. Otto. they go off in the woods to find a phone to call somebody about the car but wander into a day care training for kids who want to be in the army. then the leader comes (who is really Dr. Otto in disguise using a machine called the changing coffin) and escape when after a game where if you lose you lose your life. After a long adventure they finally wander into Otto's lair and have a fight with Otto. Dr. Otto's lair explodes and all seems good but Otto really escaped into the changing coffin. Then Lance and gang push the car to a gas station and then the owner of the gas station emerges from a familiar changing coffin but from the changing coffin comes out Ernest P. Worrel. Lance asks for a gas refill with Ernest replying we ain't had none since the money went bad. Then Lance and gang push the car off screen and Ernest lifts his hat to reveal a hand on top of his head and yells, "Have a good day knowwhatimean!", hinting Ernest made the coffin and accidentally turned into his evil nemesis Dr. Otto but took control and changed himself back.

Retrieved from "https://ernestpworrell.fandom.com/wiki/Dr._Otto_and_the_Riddle_of_the_Gloom_Beam?oldid=4152"
Community content is available under CC-BY-SA unless otherwise noted.